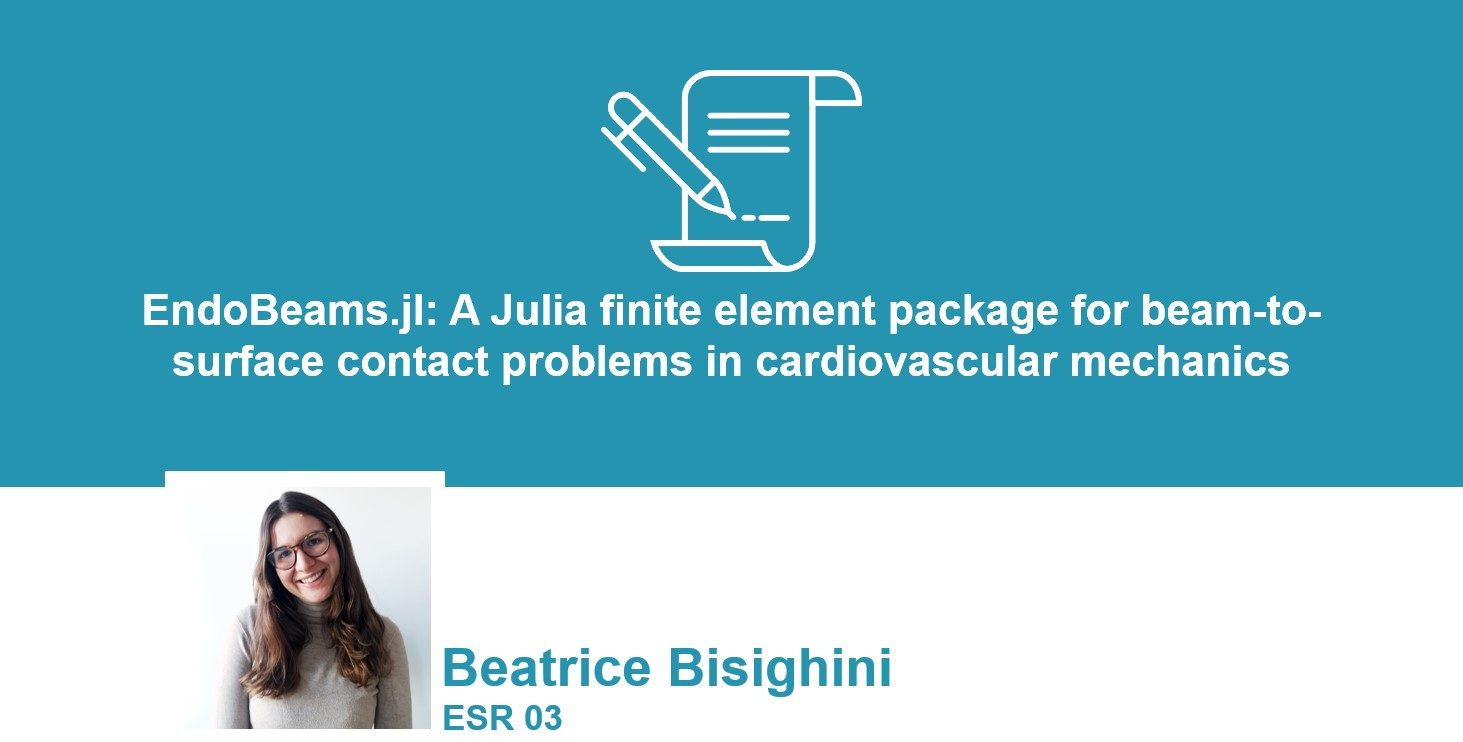 The work was developed in collaboration with Miquel Aguirre, Baptiste Pierrat and Stéphane Avril from Mines Saint-Étienne and David Perrin from PrediSurge.

The paper, whose abstract is reported in the following lines, is available at this link.

The increasing use of mini-invasive and endovascular surgical techniques is at the origin of the pressing need for
computational models to support planning and training. Several implantable devices have a wire-like structure,
which can be modelled using beam elements. Our objective is to create an efficient Finite Element (FE) modelling
framework for such devices. For that, we developed the EndoBeams.jl package, written exclusively in Julia, for
the numerical simulation of contact interactions between wire-like structures and rigid surfaces. The package is
based on a 3D FE corotational formulation for frictional contact dynamics of beams. The rigid target surface is
described implicitly using a signed distance field, predefined in a volumetric grid. Since the main objective
behind this package is to find the best compromise between computational speed and code readability, the al-
gorithm, originally in Matlab, was translated and optimised in Julia, a programming language designed to
combine the performance of low-level languages with the productivity of high-level ones. To evaluate the
robustness, a set of tests were conducted to compare the simulation results and computational time of Endo-
Beams.jl against literature data, the original Matlab code and the commercial software Abaqus. The tests proved
the accuracy of the underlying beam-to-surface formulation and showed the drastic performance improvement of
the Julia code with respect to the original one. EndoBeams.jl is also slightly faster than Abaqus. Finally, as a proof
of concept in cardiovascular medicine, a further example is shown where the deployment of a braided stent is
simulated within an idealised artery.

Privacy Settings
We use cookies to enhance your experience while using our website. If you are using our Services via a browser you can restrict, block or remove cookies through your web browser settings. We also use content and scripts from third parties that may use tracking technologies. You can selectively provide your consent below to allow such third party embeds. For complete information about the cookies we use, data we collect and how we process them, please check our Privacy Policy
Youtube
Consent to display content from Youtube
Vimeo
Consent to display content from Vimeo
Google Maps
Consent to display content from Google
Save
We use cookies on our website to give you the most relevant experience by remembering your preferences and repeat visits. By clicking “Accept All”, you consent to the use of ALL the cookies. However, you may visit "Cookie Settings" to provide a controlled consent.
Cookie SettingsReject AllAccept All
Manage consent

This website uses cookies to improve your experience while you navigate through the website. Out of these, the cookies that are categorized as necessary are stored on your browser as they are essential for the working of basic functionalities of the website. We also use third-party cookies that help us analyze and understand how you use this website. These cookies will be stored in your browser only with your consent. You also have the option to opt-out of these cookies. But opting out of some of these cookies may affect your browsing experience.
Necessary Always Enabled
Necessary cookies are absolutely essential for the website to function properly. These cookies ensure basic functionalities and security features of the website, anonymously.
Functional
Functional cookies help to perform certain functionalities like sharing the content of the website on social media platforms, collect feedbacks, and other third-party features.
Performance
Performance cookies are used to understand and analyze the key performance indexes of the website which helps in delivering a better user experience for the visitors.
Analytics
Analytical cookies are used to understand how visitors interact with the website. These cookies help provide information on metrics the number of visitors, bounce rate, traffic source, etc.
Advertisement
Advertisement cookies are used to provide visitors with relevant ads and marketing campaigns. These cookies track visitors across websites and collect information to provide customized ads.
Others
Other uncategorized cookies are those that are being analyzed and have not been classified into a category as yet.
SAVE & ACCEPT